This December is ten years since my breast cancer (knock on wood!). When I was diagnosed, I was 42, madly in love, and a busy author writing books for HarperCollins and Random House. To say I was blind-sided is putting it mildly. I had never felt so healthy in my life. I exercised regularly, ate an almost vegetarian diet, and I rarely even caught a cold. My lump was palpable, but my mammogram was negative. My OB/Gyn thought it was just another of the cysts I was prone to getting. But I had a sense it wasn’t going away. I requested an ultrasound three months after the negative mammogram when I felt a prickle right on the spot, like it was saying, “Hey, get rid of me! I’m bad news!” That ultrasound lead to a biopsy which showed I had a rare form of breast cancer called pure mucinous carcinoma. My world turned upside-down the moment I got the call from my doctor saying, “I’m sorry. It’s not a cyst.” My knees wobbled. My brain went foggy. 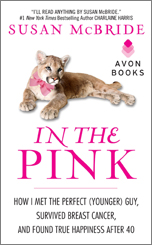 For more of Susan’s story, check out her short memoir from Avon, IN THE PINK.

And then the adrenaline kicked in.

Forget deadlines. Forget picking out the engagement ring my then-boyfriend (now husband) wanted to buy me. Forget the new book coming out, or the new house we’d bought together that I was still painting and decorating. All I could think about was the lump in my left breast. I saw it as an alien that had invaded my body. I wanted it gone ASAP. I went to the surgeon within days—as soon as she could see me—and got the whole talk about mastectomy vs. lumpectomy and the treatment that would follow. Gulp. I saw the radiation oncologist and the plain-old oncologist. I had blood drawn, x-rays taken, underwent an MRI with contrast dye, whatever needed doing to prepare me for surgery.

After much investigation of my type of cancer, I chose a conservative route. I ended up having a lumpectomy with sentinel node biopsy to see if the cancer had spread. Thankfully, it hadn’t. But the lumpectomy hadn’t cleared one margin, so I had to go back in for a re-excision several weeks later, after I was healing and feeling better. Yeah, it sucked, but it could have been worse. I tried not to be a baby about it, but you can’t help throwing the occasional pity party and wondering, “Why me?”

I had books to write and a new one to promote. Ed proposed during the whole mess—a joyous moment amidst the madness—and so I had a wedding to plan. I wanted to be my old self again. I wanted to be happy and healthy, go to movies and hockey games, and enjoy my life. But everything had to wait, or at least sit in line behind radiation therapy which took six and a half weeks and turned my left chest area the most frightening shade of red (with lots of little bubbles and a dry crusty nipple, too—yeeha). On the bright side: I did not have to do chemotherapy.

Every day seemed like forever, filled with endless moments wondering when I would regain control of a world that felt chaotic. But time folded those moments together, pushing me forward until everything that felt so upside-down finally righted itself. I regained my footing. I regained my health. I had a new normal to contend with, but that was okay. I learned to cope with aches and shooting pains in my left chest that still plague me to this day. I adjusted to the sight of the ding and the scar on the side of my left boob. Now, I hardly notice either. 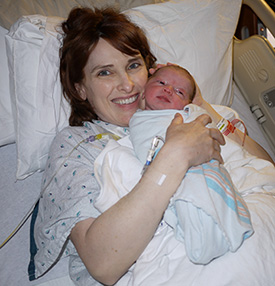 Most importantly, I learned that my husband is a man of honor and grace who will hold my hand through dark as well as light. I learned that I am stronger than I ever realized. I learned who my true friends are and who needed weeding out, and I met women who’d gone through far worse than I who inspired me and continue to inspire me.

But, best of all, five years after my diagnosis when I was 47 years old and finally feeling in great shape again, I learned that I was pregnant. Despite my age, despite my history of breast cancer, I had a completely normal pregnancy and I delivered a squalling, amazing, eight-pound baby three and a half months before I would turn 48.

The moral to my story: Life is not a straight line. It has lumps and bumps, some benign and some freakin’ scary. It has molehills to climb…and mountains. And it’s always full of surprises. No one wants to hear the words “you have cancer.” Not ever. But it doesn’t mean your world has to crash into a bottomless pit. It just means you have brush away the tears, straighten your spine, and trudge through the muck until you find your way to the other side. Often, once you do, there are better, more miraculous things awaiting you. Never give up. Never lose faith. I looked to women who had survived and thrived before me and said, “I can do that, too.” And so can you.