The Lighter Side, or the Joy of Writing “Blue Blood” 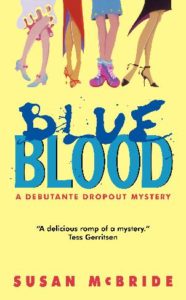 I’m not a Southern belle.

I don’t have the pedigree. My dad moved us around a lot when I was growing up, from the Midwest to the East and finally to Texas. That pretty much makes me a mongrel. Living in Missouri has nearly wiped out the twang that I’d developed over 20 years in Houston and Dallas, but it couldn’t remove that tattoo of the Lone Star State from my butt quite so easily.

All right, so I don’t really have a tattoo, not on my skin. Just in my heart. Being a Texan for more than half my life did that to me. Does that to most folks, I’d wager.

The mystery fans who read my Maggie Ryan novels (And Then She Was Gone and Overkill)—and I thank them—know my writing as rather dark and gritty. So it’s going to be a real shocker when they pick up Blue Blood, the first of my Debutante Dropout Mysteries from Avon. They’ll assume I was spun on my head like a top, because I do take a 180-degree turn. Blue Blood isn’t about a female police detective. It’s about, yes, a “Blue Blood,” a Dallas debutante-to-be who decided not to be. A “dropout,” as the series tag suggests.

I’ll confess something to you. And, please, excuse the mush.

I love this book. Love it.

I actually wrote the first draft of Blue Blood a handful of years back, after I’d finished And Then She Was Gone. I needed to let loose, to do something bright and warm and humorous, just to get the grit of Gone out of my system. I yearned to try something new. To experiment. To flex my literary muscles and see if they’d bend backward.

Part of what prompted me was hearing a panelist at a mystery conference tell the audience that no one who wrote hard-boiled well could also write soft-boiled well. It was, this author claimed, either one or the other. Being as mule-headed as I am, it made me want to try. I don’t like anyone telling me that something’s not do-able. Just makes me want to do it all the more.

Besides, I’d been itching to tell the tale of a woman who’d grown up in high society but wants desperately to be a regular person. Though I’m pretty much as “regular” as a body gets, I’ve hung around with plenty of rich kids in the course of my life. (Honestly, could one live in exclusive Belle Haven in Greenwich, Connecticut, and not have rubbed elbows with true Blue Bloods?) I’d seen enough of how the other half lives to know I’d never fit in.

But here’s where the story really starts. When I pledged Pi Phi at the University of Texas in Austin, there were a handful of my pledge sisters who were debutantes, some of them from Highland Park in Dallas. I used to watch them practice their “Texas Dips” (curtsies that require near double-jointedness), and those memories were forever etched in my brain.

After college, I lived in Dallas for nine years, but I didn’t write Blue Blood until I’d moved to St. Louis. I’ve come to believe that it’s easier to use a familiar location when you don’t actually live there anymore. It puts some distance between you and the place, so you can see it with more objective eyes.

It was in my new hometown, not quite in the shadow of the Arch, that I began telling my tale about Andrea “Andy” Kendricks, the daughter of privilege who just wanted to be like everyone else. Only, that’s a tough aspiration with a mother like Cissy Blevins Kendricks, a dyed-in-the-wool Chanel-wearing socialite who has great plans for Andy: her debut, pledging Pi Phi at a good Texas college, and marrying well (preferably to a man with an oil well or three in his back pocket).

Andy turns those plans upside-down when her father dies before her deb ball, and she drops out, realizing it means more to Cissy than her. Andy further bucks the system by going from an elite private prep school to a small art school in Chicago, a move that doesn’t exactly thrill her mother either.

But homesick for Texas and guilty about leaving Cissy alone in the big house on Beverly Drive, Andy ends up back home in Big D, creating web pages for nonprofits and enduring Cissy’s schemes to find her a blue-blooded husband. As if that’s not tribulation enough, she gets a middle-of-the-night call from her one-time best friend Molly O’Brien. Seems Molly’s being held on suspicion of murdering her boss, the owner of a cheesy restaurant called “Jugs” where waitresses don lavender hot-pants and cut-off Tee-shirts.

Andy feels compelled to help her buddy and goes undercover at Jugs to try to unmask the killer, a task that ultimately requires her to turn to Cissy for assistance. To say that mayhem ensues is a gross understatement, and Andy begins to wonder if she’ll be the first debutante dropout to have her mug shot featured on the society pages of the Park Cities paper.

Blue Blood was a complete joy to write (draft after draft after draft). Not only did I get to use that memory of my Pi Phi pledge sisters doing Texas dips in study hall, but I also had the privilege of killing Bud Hartman, the owner of Jugs, a place that’s eerily similar to Hooters. (Strange how those coincidences happen, isn’t it?)

I know there are folks out there who don’t take lighter mysteries seriously, who think they’re about as literary as a cereal box; but as an author who’s now written on both the light and dark sides, it’s my opinion that one’s no more important than the other. In fact, with all that’s going on in the world these days, we need humor, however it’s packaged. We need to laugh, to be able to read a story that doesn’t have us turning on our nightlights.

So my word to soft-boiled bashers?